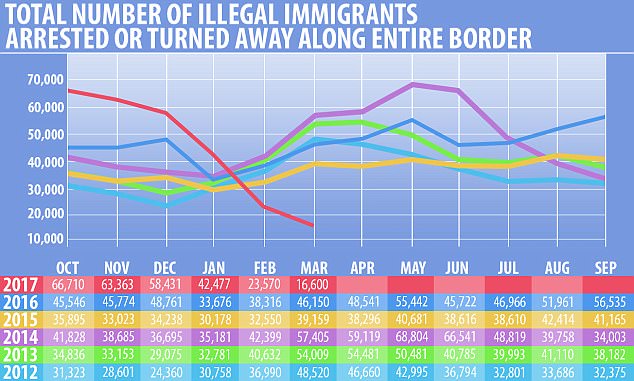 Actions speak louder than words, results speak louder than actions, and data backing up those results speak the loudest of all. Throughout his campaign, Donald Trump took a hard line on illegal immigration. It cannot be argued that he spoke boldly on the topic and won several supporters and critics in the process. Fast forward and we are still embroiled in a debate over what to do with illegal immigrants, how to handle this issue, and how to best deal with sanctuary cities that seem to think the law does not apply to them. Whatever our opinions or personal views, recent data shows that Trump’s stance on illegal immigration is having an effect.

The premise is simple. A law is not a law unless it is actively enforced. Think about your morning commute and where you set your cruise control on the highway. Do you set it at the speed limit, or do you set it a few ticks faster knowing that you will not be pulled over? If the police were to give tickets based on the actual law, you would see travel speeds decrease as a darker line is drawn between the law and its enforcement. The same can be said for illegal immigration.

According to numbers released this week, apprehensions by the Border Patrol dropped to 11,129 in April. This represents the lowest monthly total for any month in decades. Even without the wall, Trump’s hard line stance on illegal immigration has had a marked effect. It has been estimated that illegal immigrants paid around $5,000-$10,000 to be smuggled across the border. Following Trump taking office, the cost for this “service” has increased and many have determined the cost is simply not worth the risk of being sent back. Simply put, greater enforcement of our laws or even the threat of such has caused many would be illegals to rethink their strategy.

America is a place for immigrants. America is not a place for illegal immigrants. While progressives look to oppose immigration reform and bolster sanctuary cities, it is again impossible to argue with the data. In Texas alone during the period of June 1, 2011 and February 28, 2017, the 215,000 criminal aliens who were booked into Texas jails were charged with 566,000 offenses, including 1,167 homicides, 6,098 assaults and a total of 257,000 convictions, as reported by Breitbart Media. The stories that make up statistics such as these are no less tragic. Just this week, a 15 time deportee suspected in a DUI hit-and-run was arrested for his role in putting a young boy, Lennox Lake, in the hospital. We can debate the role of illegal immigrants in the economy, but crime data doesn’t lie. The stories don’t lie.

UPDATE: ICE confirms hit and run driver who hurt child has been deported AT LEAST 15 times since 2002 @10News pic.twitter.com/caz8KgvxlF